“We saw dinosaurs on a field trip to the natural history museum.”  (Who knew that dinosaurs liked field trips?)

“Flying over the African landscape, the elephant herd looked majestic.”  (I never knew elephants could fly.)

“I glimpsed a rat sorting the recyclable materials.”  (I have a great respect for rats who have such an active concern for our environment.)

Like most languages, English has some very specific rules about word placement.  Breaking these rules can lead to some disastrous, if not humorous, misunderstandings.  Native speakers of a language learn most of the rules for placement of modifiers as they learn the language but probably cannot describe the rules to anyone else.  For example, consider the phrase, my beautiful curly-haired Goldendoodle; native speakers know that it would sound odd to say, my curly-haired beautiful Goldendoodle.  The rules for ordering those words are complex and would be difficult to grasp for an English as a second language learner.   However, sometimes native speakers also get in trouble with the placement of some modifiers.  Such modifier errors are called dangling, misplaced, and squinting modifiers.

Adjectives and adverbs are modifiers; they are words, phrases, or clauses that describe or limit the meaning of other single words or phrases.  Adjectives describe nouns and pronouns, and adverbs describe verbs, adjectives, and other adverbs.  The referent is a word that an adjective or adverb describes.  In this sentence The lush green grass appeared overnight, the, lush and green are adjectives describing the referent noun grass, and overnight is an adverb describing the referent verb appeared.

So now you know what a modifier is; next, you should consider how to avoid errors in placing them.  Using a dangling modifier is a common misstep for writers.  It frequently occurs when a writer uses passive voice but also happens in other sentences when the referent is missing.  Most often, but not always, a dangling modifier comes at the beginning of a sentence:  “Coming out of the market, the bananas fell on the pavement.”  (Example retrieved from The Writing Center, UW-Madison 2009)

Misplaced modifiers happen when a modifying adjective or adverb is not near its referent.  One of the more famous examples of this error comes from comedian Groucho Marx who said, “One morning I shot an elephant in my pajamas. How he got into my pajamas, I’ll never know.”  There’s an image that I want to get out of my head.  Here are some other examples:

Confusing:  “Hopping briskly through the vegetable garden, I saw a toad.”  (My neighbors are beginning to talk about my gardening activities.)

Corrected:  I saw a toad hopping briskly through the vegetable garden.

Confusing:  “I gave olives to my friend that I stabbed with my fork.”  (He thought that was a high price to pay for some olives.)

Corrected:  I gave my friend olives that I stabbed with my fork.

The third modifier error is called a squinting modifier.  It’s hard to tell whether the word/phrase modifies the word before or after it.

“We cannot accept reasoning that is completely illogical.” 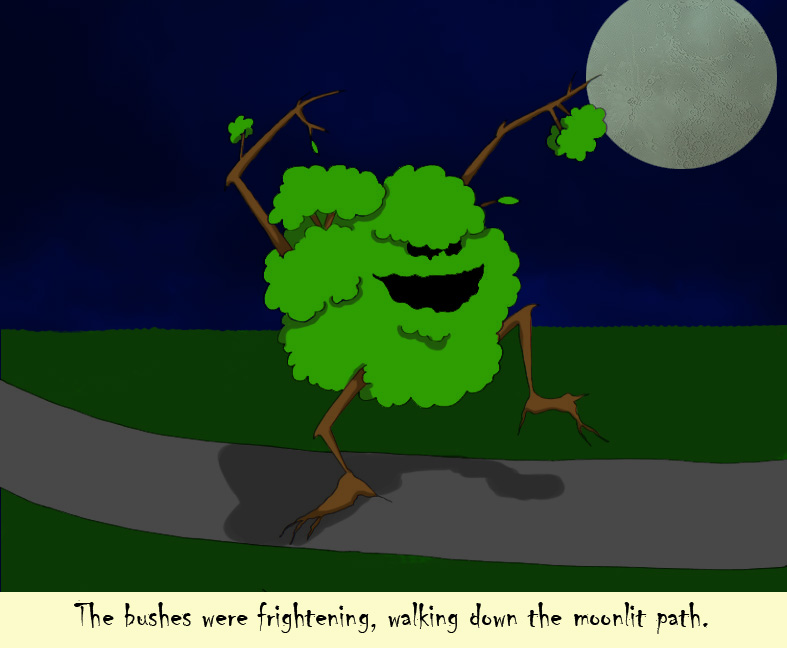 Putting modifiers in their proper place can be challenging.  The humorous blunders that occur with dangling, misplaced, and squinting modifiers make for interesting examples of what not to do.  The skilled writer is familiar with these missteps and can avoid or correct them with ease.